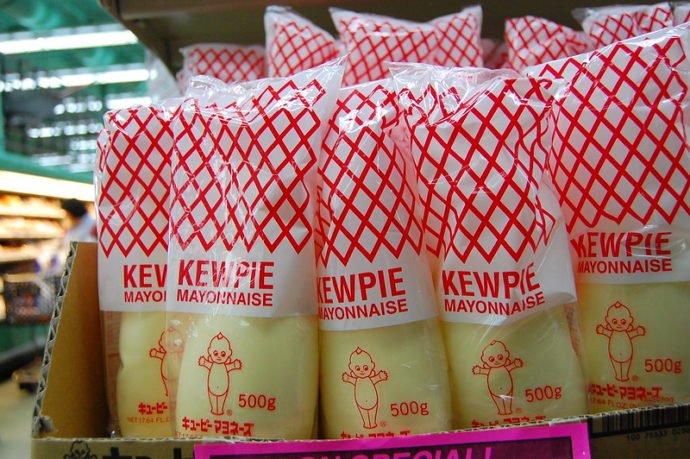 Kewpie Corporation is a leader in the Japanese food industry that produces and sells salad dressings and pasta sauces with a focus on mayonnaise. The company started out in 1919 as Shokuhin Kogyo Co., Ltd. in Nakano-ku, Tokyo, manufacturing sauces and canned foods. In 1925, it became the first company in Japan to produce and sell mayonnaise. The consolidated group employs 16,003 people, with products such as Kewpie Mayonnaise and Kewpie Dressings.

A look at earnings for the fiscal year ending November 2020 (December 1, 2019 to November 30, 2020) shows consolidated sales down 2.7% from the previous year to ¥531.103 billion, and operating income down 11.7% to ¥28.303 billion. Due to the COVID-19 pandemic, sluggish demand for dining out led to lower sales volume of commercial-use products, resulting in a decrease in both sales and operating income.

Now, let’s take a look at Kewpie’s efforts to achieve sustainability and the SDGs.

Three Material Issues: Contributing to Food Culture and Health, Effective Use and Recycling of Resources, Dealing with Climate Change

The Kewpie Group identified the following social issues to engage in through its business by performing a risk and opportunity analysis of its value chain while referring to the SDGs.

They are: sustainable procurement and support of the supply chain, promotion of diversity, mental and physical health support for children, contribution to extending healthy lifespans, prevention of bribery, consideration of human rights, improved efficiency of water use, improved efficiency of energy use, efficient use of resources, reduction of plastic waste, reduction of CO2 emissions in response to climate change, waste reduction, and preservation of biodiversity.

Next, by evaluating the size of stakeholder expectations and the size of the Kewpie Group’s social impact for each of these issues, three Material Issues for Sustainability for the most urgent engagement by the Kewpie Group were determined: Contributing to Food Culture and Health, Effective Use and Recycling of Resources, Dealing with Climate Change.

Contributing to Food Culture and Health

First, there are two initiative themes under Contributing to Food Culture and Health.

One of these is contribution to extending to healthy life expectancy. Two targets have been set for all of FY2021, FY2024, and FY2030: achieving vegetable intake of 350 grams per person per day and promoting a boost in egg consumption to contribute to increased protein intake.

Concrete initiatives include providing information on recipes that enable effective protein intake for those who exercise and holding lectures events themed on food. Kewpie also started its internal certification program Tamago Star in FY 2019, awarded to those who have attended a study session for correctly communicating knowledge about eggs and have acquired 3-Star Tamarie certification (Nihon Rangyo Kyokai Association). In the future, Kewpie plans to continue to carry out awareness-raising activities to convey the appeal of eggs, both inside and outside the company.
Kewpie has also implemented its Mame-Katsu® campaign. Beans are a well-balanced form of nutrition, but many children are not used to eating them. When eating school lunches, children often leave beans on their plates because they dislike the texture. Since 2016, Kewpie has been providing educational materials for elementary school nutrition lessons to tell children about the goodness of beans and make them more likeable, and also suggests school meal plans incorporating beans to help children get into the habit of eating beans.

In addition, Kewpie is engaged in research and development of health-conscious products and egg allergy research, and in its fine chemicals business, provides a variety of food, cosmetics, and pharmaceutical products, including acetic acid bacteria enzymes from research on vinegar.

The other theme under Contributing to Food Culture and Health is the mental and physical health support for children. The targets, though somewhat abstract, are to increase the number of children’s smiles created by Kewpie’s activities to at least 200,000 by FY2021, at least 400,000 by FY2024, and at least 1 million by FY2030.

Support is provided for dietary education activities and food banks based on the idea that establishing a healthy diet among children can lay the foundation for lifelong health.

For example, Kewpie conducts food education activities across Japan, including factory tours, visiting “Mayonnaise Classes” to teach the secret of mayonnaise and the importance of eating vegetables, and cooking lessons for elementary school students and their fathers. Mayonnaise Classes have been conducted nationwide since 2002, with over 100,000 children participating in 2019.

The Kewpie Mirai Tamago Foundation was founded in 2017 to provide donations and other support to organizations working on food education activities and measures against child poverty. As of 2020, it has provided support to 186 organizations.

Effective Use and Recycling of Resources

Next, we look at the Effective Use and Recycling of Resources. Its three themes are: the unused portions of vegetables, reduction and reuse of plastic waste, and curtailment of food loss (reduction of product waste).

Concrete initiatives involve recycling cabbage and lettuce. In FY2017, Green Message (a cut vegetables production plant jointly established by Kewpie) and JA’s Zen-Noh had success in converting leafy vegetables such as cabbage and lettuce into stock feed, something that had previously been considered difficult to do on a commercial scale. The stock feed is now used effectively by dairy farmers all over Japan, and in a joint research project between Kewpie and Tokyo University of Agriculture and Technology, it was reported that dairy cattle that were fed this feed produced greater yields of milk. Kewpie will continue to explore new ways of using the unused parts of vegetables more effectively, such as converting them to fertilizer and providing it to contracted farmers.

In 2000, as part of reduction and reuse of plastic waste, Kewpie reduced the weight of the container of its flagship product, mayonnaise, and subsequently reduced the weight of its dressing containers as well. In February 2020, Kewpie began to use recycled plastics as part (15%) of the outer packaging for single-serving stick packets for dressing. Moving forward, Kewpie intends to pursue such initiatives as the further reduction of plastic used in product containers and packaging and in factories, easy-to-separate product designs, proactive introduction of recycled and biomass plastics, and proactive participation in collection and recycling to realize a recycling economy.

Concrete initiatives include promoting 100% effective use of eggs. Kewpie produces a variety of processed egg products besides mayonnaise, with about 10% of the eggs produced in Japan used by the Kewpie Group (about 250,000 metric tons per year). Kewpie Mayonnaise is made with egg yolks, and the whites are used as ingredients in processed seafood paste products like kamaboko fish cakes and in confectionery products like cake.

The approximately 28,000 metric tons (FY2019) of eggshells generated annually would burden the environment if simply discarded, so eggshells have been put to 100% effective use by drying in the sun and selling them to farmers as soil improvement agents (fertilizer) since 1956. Eggshells are also used as an additive for calcium-enriched foods. Eggshell membranes are being used in cosmetics and other products, with a policy of reducing the amount of raw material eggs discarded to zero. 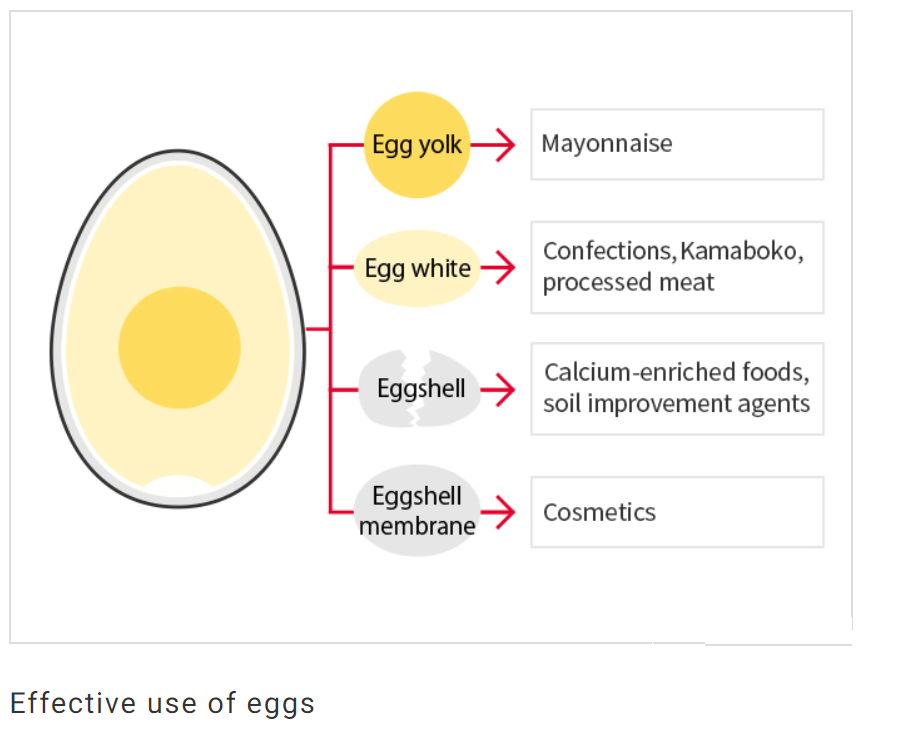 Concrete initiatives include improving efficiency and introducing energy-saving equipment in manufacturing processes across the entire Kewpie Group, as well as promoting the use of renewable energy by newly installing solar power equipment.

In logistics, Kewpie is actively promoting a modal shift from long-haul trucking to transport by rail and ship and joint transportation with other businesses. In office initiatives, Kewpie is working to optimize energy use. For example, at Sengawa Kewport, where the Group’s head offices are located, the annual energy consumption of air conditioners was successfully reduced by about 15% using AI.

Kewpie has also calculated CO2 emissions across its entire supply chain and will promote the reduction of those emissions going forward.